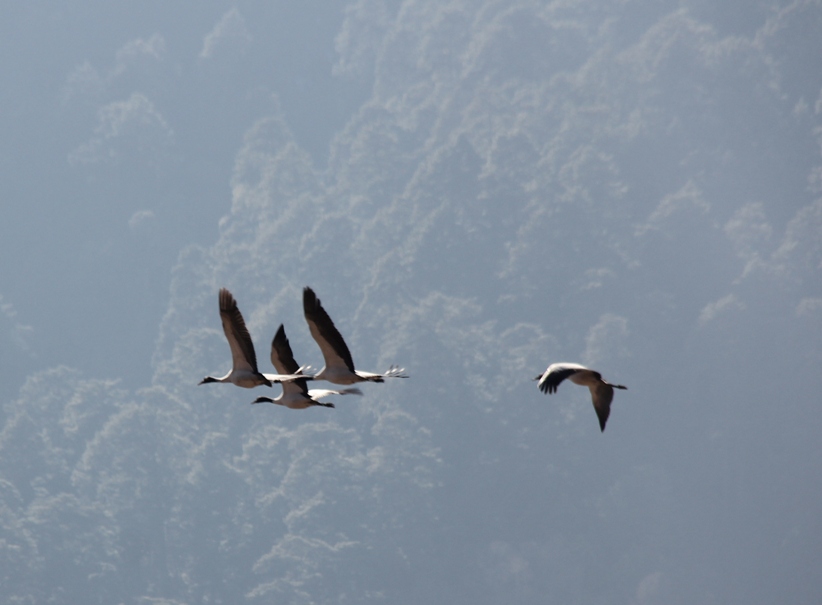 This birding trip will take you through Paro, Thimphu, Punakha, Wangduephodrang and Trongsa districts lying between altitude of 1000m – 3600m and will…

This birding trip will take you through Paro, Thimphu, Punakha, Wangduephodrang and Trongsa districts and will also cover part of Jigme Dorji National Park and Jigme Singye Wangchuck National Park. You can witness atleast 200 species of birds. You will also get to see some of the ecotourism initiatives taken by Jigme Singye Wangchuck National Park vis a vis Community Based Ecotourism Management at Nabji -Korphu block under Trongsa district.

Arrive Paro International Airport and pick up by our team members and take you to hotel.
Later you will be acclimatizing to Bhutanese weather and prepare for the birding adventure. Your birding trip will be introduced by visiting the Pachhu river where you will be able to spot water birds like Ibisbill, River lapwings, Grey, White wagtails, etc. Overnight at hotel in Paro.

Early morning drive to Chelela pass situated at 3780 m, from where you can get a view of mount Jhomolhari and also see flowers such as Asters, Potentilla and orchid species. This area is good for Himalayan Monal, Blood Pheasant, Kalij Pheasant, Bhutan laughing thrush, spotted laughing thrush, Black faced Laughing thrush, etc. later drive towards Thimphu and overnight at hotel in Thimphu.

Drive about 30 minutes to Dodena, to the north of Thimphu which is a birding hotspot in Thimphu. It is also Western boundary of Jigme Dorji National Park. At Dodena we will do bird sightings to see Black-faced Laughing Thrushes, Chestnut-bellied Rock-thrush, Common Merganzer, Crested Serpent-eagle, etc. Towards afternoon drive back to Thimphu to visit some places some places of cultural interests like Folk Heritage Museum,Traditional Arts and Crafts, Royal Takin Preserve (also can do some birding),Tashichhodzong, Buddha point and of course do some leisure walk for shopping. Overnight at hotel in Thimphu.

Early morning drive towards Punakha making a stoppage at Dochula pass to see the 108 Druk Wangyel Chorten and to witness the 360 degress spectacular view of the Himalayan mountain ranges. The birding expedition will be done in and around Dochula to see variety of woodpecker species, cuckoos, owls, warblers, Yuhinia, minivets, Fire-tailed Myzornis, the rare Ward’s Trogon, Hoary-throated Barwing, etc. Later visit the Royal Botanical Park at Lampelri to see Hill Patridges, Fantails, Satyr Tragopan, White-tailed Nuthatch. There is Information Center of the park as well as Rhododendron garden. After lunch as we further drive down you can also see the sudden drop down of altitude which makes areas favourable for green leafbirds, barbets, Asian-barred owlets, Wall-creepers, etc to sight. Overnight at Tented camp in Goenshari (Jigme Dorji National Park).

Birding exercises will be carried out starting from Rimchu upto Tashithang where species such as the threatened White-bellied heron, endangered species like pallas Fish Eagle with its White Crest are often observed on tall chirprine trees. Other bird species such as the Chestnut-headed Tesia, Niltivas, Red-headed Trogons, Wren Babblers compose and Water birds such Mandarin Duck and Pochards are also seen in these area. Overnight at Tented camp in Goenshari.

Enroute do birdwatching to see Slaty-backed Forktail, Golden-breasted Fulvetta, Grey-headed Parrotbills, fire-breasted Flowepecker, sunbirds, Black-throated tits, Striated-laughingthrush, Blue-winged Laughthrush, Cutia, Red-tailed Minla, etc. Arrive Phobjikha valley and explore Phobjikha valley, famous for the Black Necked Cranes during winter. These cranes are very rare and endangered and highly protected by the Government and use Phobjikha as their winter residence. The birds could be seen from November until March. We will try to put in the homestays where you can enjoy interacting with families and drink locally brewed wine. These homestays are community based ecotourism group supported by Royal Society for Protection of Nature. Halt in Homestays at Phobjikha.

Drive towards Nimshong passing through Chelela pass situated at an altitude of 3,150 meters, providing a wonderful opportunity for photographs and enroute pass through Trongsa Dzong, stretched along a ridge above a ravine.
Enroute do some bird watching to see Hoary-throated Barwin, Blue fronted redstarta, Rufous Necked Hornbill, Common Green Magpie and also be able to see Golden Langur, capped langur, etc. Halt at Tented camps in Nyimshong, the boundary of Jigme Singye Wangchuck National Park start from Nyimshong.

From Nyimshong starts the entry into Jigme Singye Wangchuck National Park (JSWNP) and will visit the Community Based Ecotourism Management Groups in these areas (Nyimshong, Nabji and Korphu), while not losing the focus of bird watching. We will be driving through the Geog road (block road which has been paved just recently). JSWNP is considered unique as it has a combination of all different vegetation zones starting from sub tropical in the south to alpine in the north. Enroute do some bird watching as we are travelling through the warm braodleaf forest and see Hoary-throated Barwin, Yellow-throated Fulrett, Great Hornbill, Common Green Magpie. Arrive Nabji the fertile alluvial valley which also houses Nabji Lhakhang meaning oath monastery harbouring a stone pillar where the Guru Rinpoche, Sidhu Rajha the king of Bumthang valley and Nawjay the local king of India left their hand marks as peace was made between the two Kings. Halt at Tented camp in Nabji.

Bird watching in and around the Nabji valley:

Drive on the geog (block) road until we meet the main highway and then drive to Trongsa. Visit Trongsa Dzong, the seat of Trongsa Poenlop, the post assumed by Prince before accession to the Golden Throne. Built in 17th century during the time of Zhabdrung Ngawang Namgyal, the Dzong played significant role in bringing Eastern Bhutan under the Zhabdrung's regime. We will also visit Ta Dzong, above the Trongsa Dzong which houses the museum. Overnight halt at hotel in Trongsa.

Early morning start off for Paro. After arriving at Paro, we will take a leisure walk in the town. Overnight at hotel in Paro.

After breakfast, our team will drop you to the airport for your onward journey.

Open All Close All

Bhutan (Druk - a dragon Kingdom) with approximate size of Switzerland is a Buddhist Kingdom located between China and India, and is known for its peace loving people. It has been increasingly seen as tourist hotspots due its Dzongs (fortress), snow capped mountains, valleys, rivers, good forest cover and many historical and natural heritage sites that were preserved as Bhutan remained in self imposed isolation until 1960s.

Our Government regulation mandates that all tourists have to arrange the visit through the registered tour operator of Bhutan. All International tourists visiting to Bhutan (except Indian, Bangladeshis and Maldivian who need to obtain permit at entry port) must obtain a visa clearance. Visas are processed online by your licensed Bhutanese tour operator, upon receiving full tour costs.

3. How much does it cost to visit Bhutan?

According to the suitability of season there are two seasons with different rates to visit Bhutan. The rate is inclusive of Sustainable Development Fund (SDF) of $65 per person per day, accommodation, food, English speaking guide services and land transportation within Bhutan.

4. How can I transfer the tour costs to Bhutan?

There are two ways
1. You can use your Master and Visa Card to directly send the tour costs. Online card payment will charge you 3.5% on the total payment, (2% will charge by the Card Company, 1% by your bank, 0.5% by the bank in Bhutan).

2. You can directly wire the money using the banks in your corresponding countries (the list will be provided based on your country). After remitting the payment to Bhutan in our account, we have to request our bank in Bhutan to transfer it to the Tourism Council of Bhutan Account. The transfer fee vary according to the bank which you have to bear it.

5. What is difference between Sustainable Development Fund (SDF) and daily rate?

- SDF is Sustainable Development Fee and amounts to USD65/day/person that is deducted from the daily rate (say USD 250/- during peak and USD 200/- during low season). SDF is paid directly to government and are used for providing free health care, education and infrastructure development.

- The daily rate is the amount inclusive of SDF.

6. Is there discount on the tour costs?

Yes, there are discount as listed below; Individual and Group discount.

7. How much does it cost for 2 pax and below or their surcharges?

Surcharge apply if the group size is 2 pax and below
- Single (individual) – US$ 40 per night
– Group of 2 person – US$ 30/person/night
Surcharges are determined by Government and is directly deducted from the tour costs.

8. What currency is used in Bhutan?

Bhutanese currency is known as the Ngultrum and has same value as the Indian currency of Rupee. As such Indian currency note is also used widely in Bhutan. But the international tourists must make payment in the dollar.

9. Is there any ATM to withdraw money?

ATMs are located through out the country and you can easily withdraw the amount in Bhutanese currency.

10. How far Is Bhutan Safe for the tourists?

Bhutan has been gaining popularity as a peace loving nation and is everyone’s dream to visit Bhutan. The slogan of Tourism Council of Bhutan is "Bhutan-a happiness is a place?"

11. Will there be language barrier in Bhutan?

No, there won't be any language barrier as lmost all the Bhutanese can speak English. Moreover English is used as a medium of learning and is also used for communication purpose.

12. Is the rate similar for visiting all parts of Butan?

No, there are SDF (Sustainable Development Fee of USD65/day/person) waiver if you visit Eastern parts of Bhutan comprising of Samdrupjongkhar, Trashigang, Pemagatshel, Trashiyangtse, Mongar and Lhuntse). That waiver is until December 2020 only.

We will be glad to provide answers on any front to enable you to enjoy your visit to Bhutan,